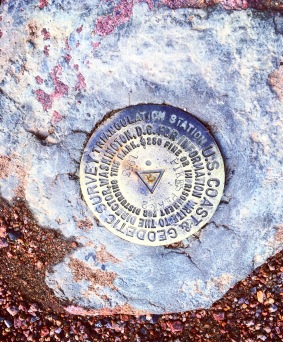 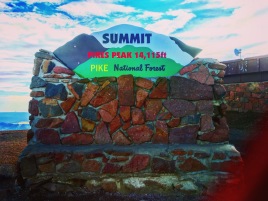 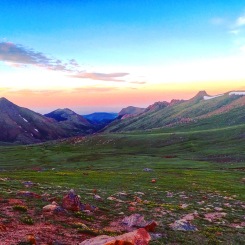 Pikes Peak receives a lot of mixed feelings I would say. At least from my experience. You see, Colorado is famous for its multitude of mountain peaks above 14,000 feet. I too am a follower of the idea that Colorado, and all the Rockies states, are superior to the other states because they have such magnificent mountains. So naturally they are a checklist item for tourists to partake in the Colorado experience. The problem is that climbing a 14er is a pretty big deal. And if you have no experience with altitude, it could literally be life-threatening. To circumvent that, two of the 53 official fourteeners can be driven to the top. Mount Evans and Pikes Peak. I climbed Evans back in 2013 as training for the Colorado Trail. I remember not realizing there would be a road to the top. I was the first person in the Bierstadt parking lot one cold 4AM morning. I remember crossing the Sawtooth Ridge and suddenly feeling no longer alone but unable to see any other people around. And then I approached Mount Evans, and was suddenly slapped in the face with all this noise and movement and commotion. People were driving to the top and not even hiking that last little mound to the true summit. It was surreal. I was overwhelmed and felt cheated of my solitude. And since then, when I mention that I have been to the top of Mount Evans, there is always an unknown asterisk involved where I feel obligated to say that yes, I actually hiked it. So I thought about all of this as I decided I needed to take advantage of my visit with Elise and Phil to finally bag this peak. And since Pike’s Peak is smack at the edge of the Front Range, the tourist factor is doubled. But I have a goal to climb them all, so why not now? The difference is that the road up Pikes Peak parallels the trail in the last couple miles. Psychologically that fact can really drain your energy in those final stret

I decided that since I was in the Springs anyways, I should take advantage of finally checking Pikes Peak off my list. I think a lot of people hit the Front Range peaks early as they are so close, but I definitely preferred to drive into the mountains more while I lived in Colorado. I like the solidarity.

Last night I experienced true insomnia for the first time. I was not restless (no more than usual at least), I was tired, I was cozy in the back seat, but I could not fall asleep. The moon was super bright and I laid awake most of the night. I finally fell asleep in the wee hours, so I gave myself an extra 15 minutes of snooze time before getting up.

I was on trail by 4am. I moved pretty slow at first because I brilliantly forgot to change my light batteries, so occasionally had to shine my phone battery to decide a route and blinded myself each time in the process. When I finally hit the tree-line, there was enough light from the sunrise that I missed while dilly-dallying on the west side of the saddle, to easily move ahead. However, that is also when the trail is basically straight up. I felt like I was moving incredibly slow. But I reached the summit of Pikes Peak at 7:30am. I saw a guy returning to the parking lot right as I started, but I never saw him again, so I can only imagine he was camped out and leaving before sunrise for some reason. Besides him, I never saw another human on my way up. I was the first human at the summit, but I was beat there by a herd of 12 bighorn sheep. I wandered around the top for about 25 minutes because there is a lot to see up there. I didn’t know what to expect the cog railroad to look like, but there is a viewing platform, a large summit sign, and enormous building that I checked out. I also snapped a few shots of the sheep, who scared the breath out of me as I rounded the main building and sent a few bolting. They were all up there nosing around in the back of the garbage truck. As I was preparing to leave, a ranger drove up. She was very nice and saved my summit photo by showing me where the USGS marker was hidden. I had walked right by because it wasn’t really the highest area to my mind’s eye, plus those bighorn sheep distracted me.

Anyway, I headed back down just before 8am and reached my vehicle just after 10am. At just over 6 hours, and 5.5 hours of “moving” time, I feel pretty good about my effort.

I crammed my face full of snacks and hit the road for Twin Lakes. That last drop down from the front range looking across at the Sawatch is such a beautiful view! As I drove in I saw a CT hiker walking the road, I picked her up and took her to Twin Lakes. There I found a whole slew of CT’ers. I barely saw any CT hikers when I hiked it back in 2013, so I didn’t think they could all be in one place like that! Anyway, I had been hoping to find CT and CDT hikers. I had cold soda and a variety of candy to deal out. I gave another hiker a ride and then sat at a spot where the CT crosses a dirt road at the far end of the lake. None of those hikers had stopped in town and were so delighted for a cold drink. It feels really good to mingle with hikers, even if I am not actually on trail with them. And it feels great to provide some magic!

I set up camp at Lakeview Campground and have a stunning view down on the lakes shadowed by the Collegiate Peaks. Plus the CT runs about ten feet below, so I am hoping to provide more treats the next couple days. Also, I am in a ridiculous camp setup. Since I flew in, I borrowed a vehicle and all their 1980 gear. So I have a 7-foot tall tent that isn’t waterproof, two big beefy sleeping bags that roll up to the size of pony kegs, and so much space I set up a chair next to my bed inside the tent. I literally had to hang a towel across the ceiling because the afternoon rains were dripping through while I was lounging and working on my computer. My final glamorous asset is a cooler. Boom! I will likely drive into Leadville each evening to work on my computer, but I am going super cheap for breaky, lunch, and snacks. And I will have the luxury of instant ‘cold’ food! It doesn’t get any more luxurious than the plush life of car camping!