I woke early today, 6:30AM. I did not want to wake up. After the past two nights of little sleep, my body was screaming at me with exhaustion. I got up anyway, showered, and made sure my bags were completely packed up. One trash bag to stay behind at the hotel, my duffle with gear, and my small pack to hike with. Then I went to breakfast.

It is strange how easily my mind wanders through big dreams, like climbing Mt Kilimanjaro, and I never consider the limitations. But simple actions in life, like walking through a breakfast buffet line, remind me how much I crave trail life. The simplicity, the anonymity, the freedom. I want to explore more of this vast continent; take advantage of the few connections I have in other countries and visit before those connections dwindle. And I am reaffirmed in my desires to purge my life of superfluous things I seem to constantly acquire. There is so much waste in the world, and few places more than the U.S. Tanzania has been a whole new experience to me. Granted I have seen very little even of this one place, but what I have seen are generous and friendly people who respect and care for their land, and an environment where much of nature is adapted to versus reshaped for the conveniences of humans.

After breakfast I waited for my ride back to the Kessy Brothers office. When we arrived there was a huge group of bodies milling around and moving bags. I briefly wondered if they were all coming with me, but was assured they belonged to another group. After the chaos subsided, I was told it was time to go. I hopped back in the same vehicle and we took. There were eight people (including myself) in the vehicle, I only knew that the driver was not coming with us, and I wondered why we needed so many people.

On drive up, we passed through many villages, and whatever was happening today, it seemed like every single church we passed was spilling forth with children. My view of this country is so shallow by design, I will not even see the majority of Tanzania before departing. How masked a view a tourist receives. We stopped at Marangu Gate to settle permits and then we continued on to Nale Muru Village (6398ft/1950m) before reaching Rongai Gate. When we arrived at Rongai gate and I was left in a gazebo to eat lunch while my crew packed up and headed out. I have four porters, one cook, and my guide. How humbling the efforts of people like me to carry a day pack up a giant mountain while four people will actually carry all the things to keep me comfortable for the next six days… I already hate this plan. I am not good at feeling useless.

Eventually Urio came to get me and we set off. Urio told me we started at Rongai Gate, but we are walking on the Natemuru Route. My crew had already left. The beginning of the trail is extremely flat and along the edge of shady jungle and agricultural plots of maize and potatoes in a mountain rainforest zone. Before we entered Mount Kilimanjaro National Park, we saw many people on their farms and some with little stands to sell drinks and snacks to trekking teams. There is a noticeable difference between the inhabited forest and protected forest. The protected forest is densely vegetated, every plant fighting for its small niche of sunlight. KNP is about 720 square miles of protected land around Mount Kilimanjaro. The other side has farms, rows of planted pines for timber, less variety, and less plants in total. It was a stark transition as we entered the park and suddenly the sounds of birds, insects, monkeys, and a gurgling river overtook me. I saw lemonwood trees (Xymalos monospora) with big veiny leaves, East African yellow wood (Podocarpus falcatus) with a long empty trunk on the tallest trees, red mahogany (Khaya anthotheca) with a curving trunk twisting around toward the sky’s sunny rays, and transvaal olinia. I also could hear baboons and saw both a playful blue monkey chasing a black and white colobus monkey around some branches. There were maybe eight blue monkeys. They seemed completely unfazed by my presence. Pretty quickly we had a gradual climb passing through scrub to moorland. And then we were at Simba Camp, with great views out over the Kenyan plains.

I suspect this route will become more challenging, but was a breeze of a first day. Sit in a vehicle for 4 hours, hike up a short 7 km, then arrive to my tent set up and hot wash water waiting for me. Of course, I am only carrying a day pack, whereas each person on my crew is carrying 20 kilos a piece. Maybe that is why today is so short? Get everyone on the mountain then quickly drop weight from eating and having ready water sources.

I will admit that I was beginning to look forward to sharing a camp with the ten or so other tourists whose names I saw on the register. With only Urio and Betos (my cook) speaking English, I was already feeling a lonely silence. Every time we caught up to my crew, they would all chat excitedly in Swahili. They also are sharing a tent, where they all retreated to immediately upon my arrival. This 5×5 foot tent already feels like a mini prison. When we arrived at camp though, there were at least six different groups and many many more arrived as the day wore on. I liked the idea of a few people sharing the trail, but it seems that I am getting significantly more. It also appears that my setup is not anomalous to have so many crew members. These four German guys I met at the gate had a crew of 18 porters, 2 guides, and 2 cooks. Phenomenal! I don’t yet know what to make of this industry. 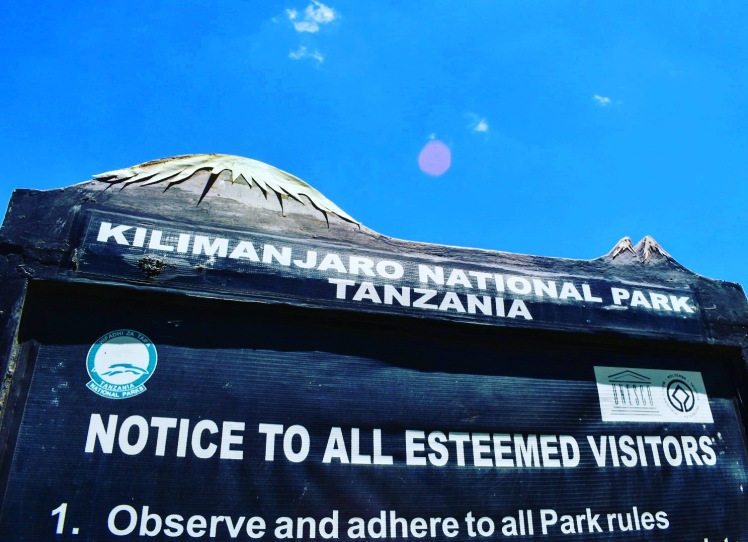 It’s official! I am trekking up Mount Kilimanjaro! 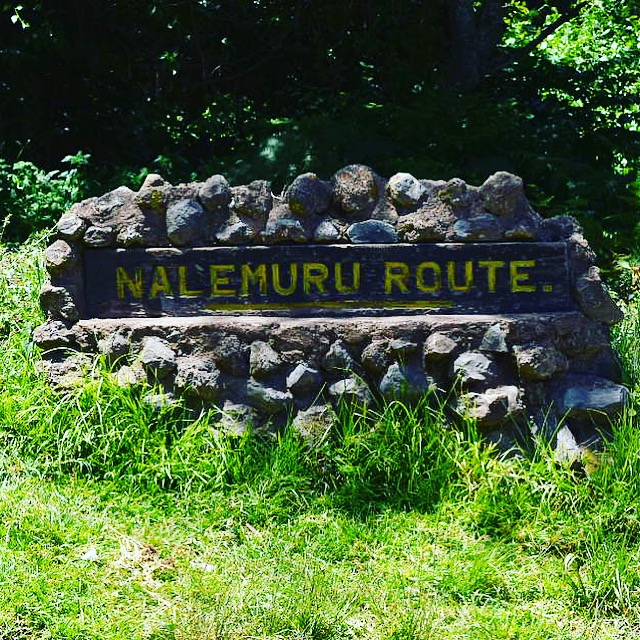 Nalemuru Route from the Rongai Gate 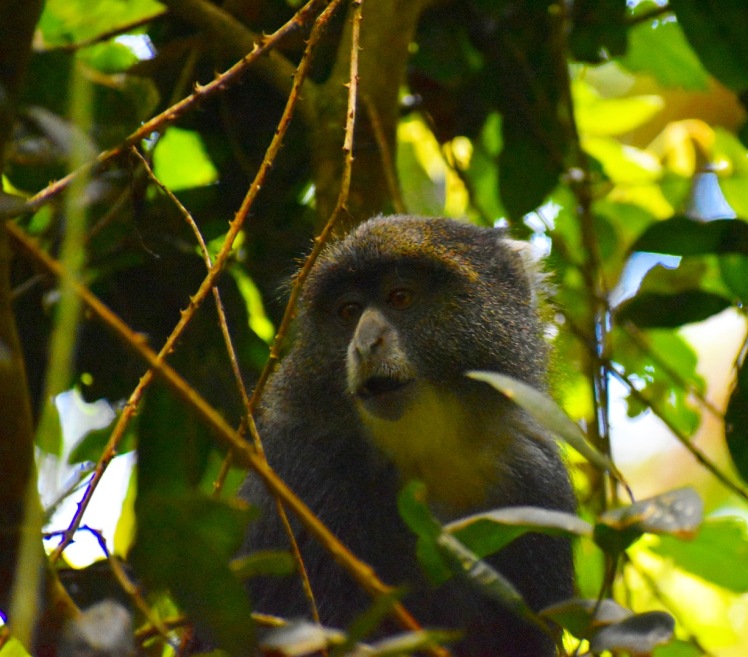 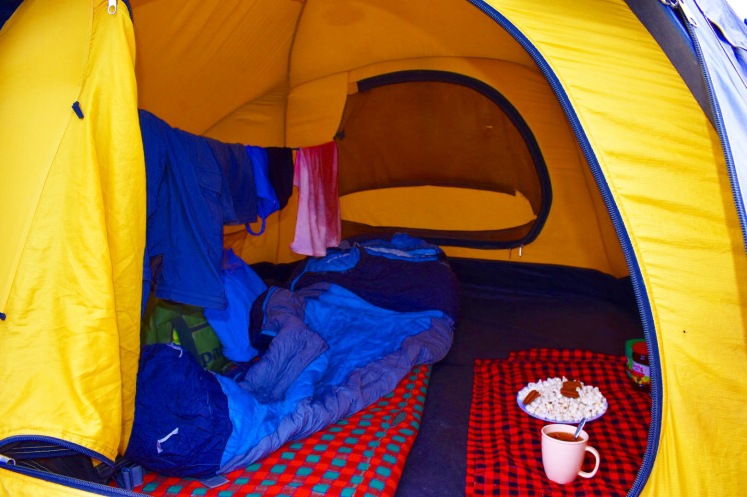 Home sweet home – or – my cell for the next week. 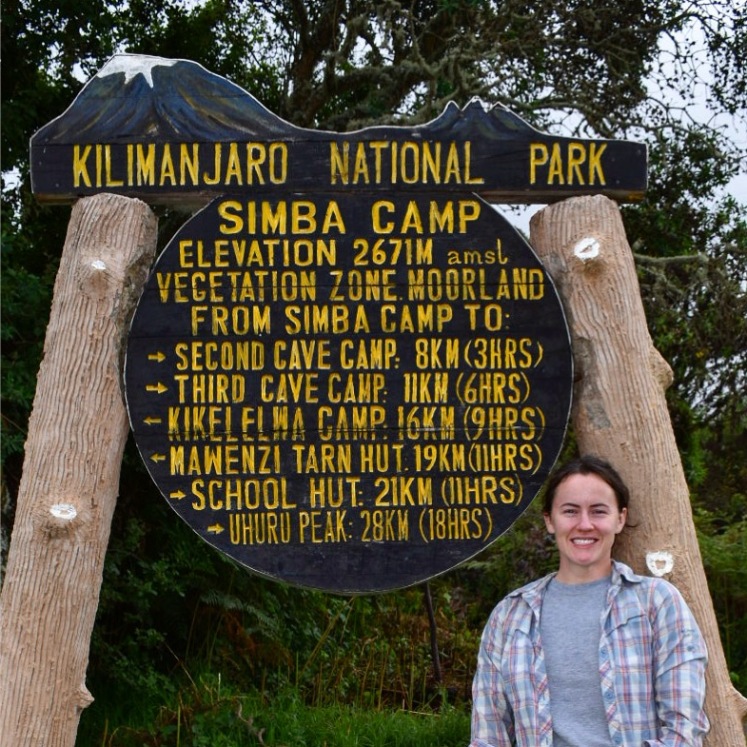 Happy to reach my first camp!