Today we headed to our southernmost accessible outcrops at Gerard Bluffs. We were wandering through the area and found a mafic pod where we could literally see the hammer marks on the rocks and a remnant of the “fresh” rock piece that would have been sampled by the previous geology group. I suppose I am only assuming these are remnants of a geology group, but I don’t know any of science group who would have been in the Miller Range hammering on rocks. It highlights an interesting question on the future of geology in Antarctica. That is, what is the future of geology in Antarctica?

About 14 years ago, an incredible resource for geologists was established at Ohio State University called the U.S. Polar Rock Repository (http://research.bpcrc.osu.edu/rr/). It is a national facility funded by NSF’s Office of Polar Programs to house field notes, photos, maps, cores, thin sections, and samples from Antarctica, the Arctic, and southern South America and South Africa. Dr. Anne Grunow, curator for the U.S. PRR, is a highly regarded Antarctic paleomagnetist. She completed about a dozen research expeditions to Antarctica during the 1980’s and 90’s. One of her primary goals with the repository was to centralize the samples collected from all previous expeditions. Having just gone through the process myself, I can say that she is trying to give researchers the ability to access Antarctica’s rocks without the necessity for the resources it would take to perform field work. It is quite the expensive endeavor when you consider the flights to Christchurch then McMurdo, as well as flights on the continent to transport people, food, supplies, and equipment. There are costs for the field teams in addition to housing, feeding, and outfitting all the support personnel that make up McMurdo, South Pole, and all the other stations. To instead open your computer, filter through the approximately 40,000 samples currently catalogued at the PRR, select the few dozen samples you want to work on, and then wait for them to arrive in the mail. This is an incredible opportunity! I myself am currently working on rocks provided by the PRR.

Needless to say, the U.S. PRR is a huge asset to geologists, and Anne Grunow is an incredible scientist for coordinating the endeavor. The only side affect is that it has reduced the need for geologists to get into the field as well as weakened any argument for field work in Antarctica. As a geologist, one of my favorite parts is getting into the field. I love traveling and exploring, but what a far more rewarding experience to combine adventure and science. It is somewhat daunting to think that fieldwork may become a thing of the past as we, the greater scientific community, move toward a system with open data and sample repositories. I am all for collaboration, but I think there are strong arguments for collecting your own samples. It enables a greater understanding of the field relationships for the geologic story recorded in the outcrop. All I can say is how appreciative I am to have had this opportunity to collect my own samples. 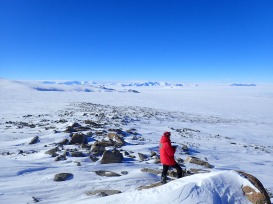 John on the hunt © http://www.elizabeth-erickson.com

Looking out on the Polar Plateau © http://www.elizabeth-erickson.com 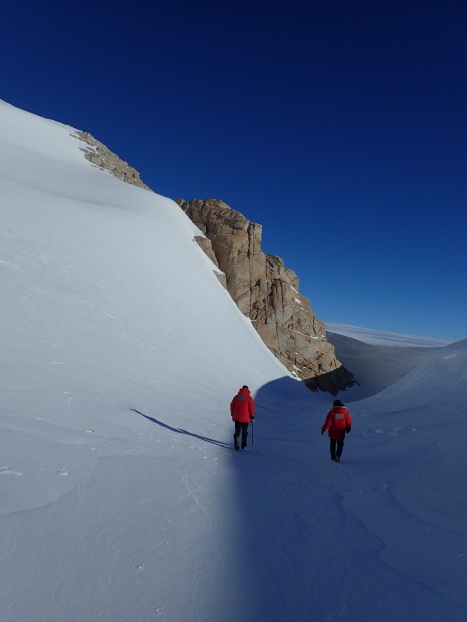 Demian, prior to his big jump © http://www.elizabeth-erickson.com